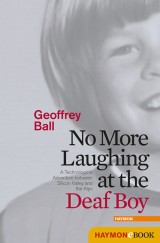 No More Laughing at the Deaf Boy

A Technological Adventure between Silicon Valley and the Alps
1. Aufl.

Hearing loss affects countless millions of people, yet few sufferers even seek help, let alone try to find a cure. This is the story of a man who took on that daunting task and ultimately invented the world's most successful middle ear implant.
Geoffrey Ball's adventure in technology began in the legendary Silicon Valley of California, the birthplace of so many innovations that have transformed our world, and ultimately led him to the mountains of Austria, where he now lives and continues his work.
Ball's deafness was diagnosed early, but even as a child he knew that sign language and conventional hearing aids were not the answer. Despite his proficiency in lipreading, he wanted more - a better fix. Meanwhile, Ball never let his disability stand in his way. He became a kind of modern Renaissance man with interests that ranged from literature to sports to music, all coupled with an undeniable talent for entrepreneurship and invention.
The author introduces us to family and friends, surfing buddies and lab rats, business partners and fellow inventors, computer and Internet legends, a brilliant, larger-than-life mentor who gave him his start, and the woman who ultimately saved his brainchild. He intersperses insights into technology, funding and business acumen with personal, often humorous anecdotes and fascinating accounts of successes, failures and near misses along the way.
Today, every hour, somewhere in the world, one of his ground- breaking devices improves the quality of life of a hearing-impaired person. No one is laughing at the deaf boy now, and we haven't heard the last of Geoffrey Ball.

Geoffrey R. Ball, born 1964 in Ann Arbor/Michigan, is an inventor who grew up in the heart of Silicon Valley in Sunnyvale, California. Diagnosed with severe sensory-neural hearing loss as a young child, Ball grew up in a world of deafness and found a way to turn a disability into an advantage. One of Sunnyvale's true sons, he went on to become a leading researcher in the field of hearing implants and a founding team member of several startup companies, including Symphonix Devices, Inc. Geoffrey Ball is currently the only living person known to have been surgically implanted with two implantable devices of his own invention to treat a major chronic medical condition. His hearing implants are now approved and implanted in over 60 countries worldwide. Every hour somewhere in the world, someone is implanted with one of his devices. Today Geoffrey Ball works as a recognized entrepreneur, researcher and inventor in Innsbruck/Austria.